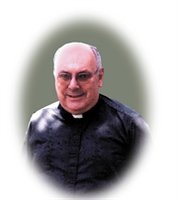 Rev. James A. Delbel, 69, died July 10, 2013, 4:30 a.m. at St. Mary's Rectory in Champlain, NY. after a valiant battle with cancer. Father Delbel was born in Ottawa, Ontario, Canada on November 8, 1943, son of the late Nello V and Evelyn M. Eagleson Delbel. After graduation from Plattsburgh High School, he completed B.A. studies at St. Lawrence University in Canton and M.A. studies at Penn State University, University Park, PA. in 1970. Father entered Wadhams Hall in 1977, continuing his theological studies at the American College in Louvain, Belgium. He was ordained at St. Mary's Cathedral in Ogdensburg, NY on September 5, 1981 by Bishop Stanislaus J. Brzana. Fr. Delbel' s first assignment was as associate pastor at Notre Dame, Malone, and then associate pastor at St. John's, Plattsburgh, NY and in 1984 he was asked to be principal at St. John's Academy in Plattsburgh. In 1987 Father was associate pastor at St. Mary's Cathedral in Ogdensburg and was temporary Administrator of St. Mary's Cathedral from 1990 to 1991. In June of 1991, Father was named pastor of St. Regis Falls and Holy Cross, Hopkinton; in 1998, pastor at Willsboro and Essex, and pastor of St. Mary's Champlain in 2005. While in Willsboro Father was chaplain at Moriah Shock prison and active in High Peaks Hospice. Father Delbel is survived by his sister Linda Ivanits and her husband Deacon Laszlo Ivanits who serves as deacon at Penn State University and was a great help to Fr. Delbel these past months. Father is also survived by his sister Moreen Austin and a brother Jeffery Delbel. A Mass of Christian Burial will be celebrated on Monday, July 15, 2013 at 11 a.m. at St. Mary's Church, 86 Church Street, Champlain, NY with the Most Reverend Terry R. LaValley, Bishop of Ogdensburg presiding, and the priests of the diocese concelebrating. The homilist will be Rev. Clyde Lewis, pastor of St. Patrick's in Rouses Point, NY. There will be reception of the body by Msgr. Dennis Duprey, pastor of St. Peter's, Plattsburgh, at St. Mary's Church in Champlain Sunday, July 14, at 2:30 p.m., with calling hours at the Church from 3 p.m. to 7 p.m. Calling hours will conclude with Night Prayer at 7:00 p.m.. Calling hours will continue Monday morning from 9:30 a.m. to 10:30 a.m. at the church followed by the funeral Mass at 11 a.m. A reception will follow at the Knights of Columbus Council #3525 in Champlain. Interment will be at 12:00 pm on Wednesday, July 17th in Mount Carmel Cemetery in Plattsburgh. Arrangements are in the care of M.B. Clark Funeral Home, 196 Elm Street, Champlain, NY 12919. To light a candle by sharing a thought or memory, please visit Fr. Delbel's obituary online at www.mbclarkfuneralhome.com.