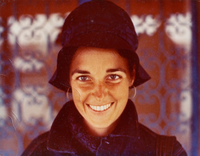 Farrell, Catherine Otis (Cathy) 77, of Brooklyn and Keene, NY, passed away on July 18 at her summer home in Keene after contending for more than 15 years with what her doctors think was pre-frontal temporal dementia. She was surrounded at her death and the days before it by her husband of 50 years, Greg Farrell, her sons Andrew and Nick Farrell, her daughter=in-law Chloe Farrell, her grandchildren Cormac and Fallon Farrell, her future daughter-in-law, Krista Van Wart, and her caregiver and friend, Vanecia Johnson. Because of the dementia, she retired in 2004 at age 62 as Dean of the Division of Cooperative Education at LaGuardia Community College, where she had been a professor and administrator for 32 years. She wrote a book, Changing Lives: LaGuardia Stories, about students whose lives had been transformed by their LaGuardia experience. Before joining the LaGuardia faculty, she did anti-poverty work in Trenton and New York City. Cathy was the daughter of George and Louise Otis, of Princeton, New Jersey, and the direct descendent of Elijah Graves Otis, who invented the device that keeps elevators from falling, thus making high-rise buildings practicable. She grew up in Princeton and graduated from Miss Fine's School in 1960 and from Vassar College in 1964. She earned two masters' degrees from Columbia. Cathy was a beautiful woman with the body and grace of a ballet dancer, which she was, and the soul of a social worker, which she brought to everything she did. She was uncommonly decent and fair, and a natural-born counselor. Because of a life-altering summer exchange with a French-speaking family in Switzerland through the American Field Service (AFS), she developed a passion for Mediterranean languages and spoke fluent French and Italian and pretty good Spanish. An outstanding wife and mother, she organized her household, husband and sons with a light and compelling touch. In 1976, with the help of 50 of their closest friends, she and her husband built an off-the-grid yurt in Keene, NY, and they lived in it in summer and visited it in winter for 33 years until she persuaded her husband they should have a real house, with a bathroom, built on their property in Keene, which they did in 2009. She designed the house, and was there when she died. There are no calling hours. Services will be held at the convenience of the family. The M.B. Clark, Inc. Funeral Home in Lake Placid, NY is in charge of arrangements. Relatives and friends wishing to share a memory, upload a photograph or leave comdolences may visit www.mbclarkfuneralhome.com .