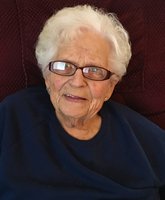 Barbara Bechard, 86, of Champlain, NY passed away on Sunday, January 12, 2020. Barbara was born in Alburgh, VT on October 14, 1933 to the late Irving and Anna (Bourgeois) Mitchell, where she was raised and attended Alburgh High School. She was married on May 14, 1960 to Robert, who was the love of her life for 56 years until his death on October 25, 2016. She was a stay at home mom and helped her husband with his rental businesses. Music was a big part of her life and she loved singing as well as playing the organ. Barbara enjoyed traveling, going to the casino, and wintered in Florida for many years. Survivors include her daughter Sonya (Roland) Oliver of Champlain, son Robert (Deanna) Bechard of Auburn, NH, grandson Tyler (Mikaela) Oliver of Plattsburgh, sister Dolores (Gordon) Blair of Alburgh, VT and many nieces and nephews. Including her husband Robert, Barbara was predeceased by her granddaughter Erin Kate Oliver, sister Joy Medor and brother P. Vincent Mitchell. Calling hours will be held at M. B. Clark Funeral Home in Champlain, NY from 4:00 PM – 7:00 PM on Wednesday, January 15, 2020. A Funeral Mass will take place at St. Patrick’s Church in Rouses Point, NY at 11:00 AM on Thursday, January 16, 2020.