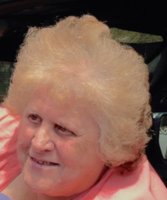 Carol Ann Castine, 78, of Ridge Road in Champlain passed away Monday, February 3, 2020 at the Plattsburgh Rehabilitation & Nursing Center. She was born May 17, 1941 in Plattsburgh, the daughter of William and Belle (Chenevert) Castine. Carol worked as the bookkeeper for the family’s Ridgeview Farms for many years until its sale in 2008. She went far beyond merely tracking dollars and cents, though, as she cooked for and took care of the farmhands and her family members. If anyone ever needed something, they knew that they could count on Carol for help. Bea, as she was known to those close to her, enjoyed spending time laughing and having lively conversations with her friends and family, going for drives around the Champlain region and New England, and trying many different kinds of cuisines. She was a lifelong communicant of St. Mary's Church in Champlain. Carol is predeceased by her parents; eight brothers, Bobby, Daniel, Donald, Frances, Harold, Stanley, Wayne, and Wendell Castine; and three sisters Peggy Castine, Gloria Hart, and Donna Clark. She is survived by her brothers William Castine and his wife Theresa of Richmond, VA, Gerald Castine and his wife Lorraine of Mooers, John Castine and his wife Jean of Champlain, Kenneth Castine and his wife Kaping of Champlain; and her nieces and nephews whom lovingly referred to her as “Nana.” A Mass of Christian burial will be celebrated at St. Mary's Church, 86 Church Street, Champlain in the spring. Memorial donations may be made to the AGS Health in Aging Foundation or the USC Center on Elder Mistreatment.