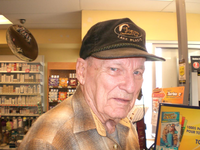 Robert E. Rider April 16, 2020 Robert E. Rider, 89 of Wilmington, NY passed away at the CVPH Medical Center in Plattsburg, N.Y. Bob was born in Syracuse, NY July 17, 1930 the son of the late Willis B. And Luella (Reynolds) Rider. Bob was a Syracuse resident for most of his life and after his retirement moved with his brother Willis to Wilmington, NY in 2002. He was a proud member of Willsboro Fish & Game Club. An avid fly fisherman, Bob always returned his catch to nature. Hunting, Bob loved being in the woods and it was told would rather shoot targets than wild game. Bob loved to work, he was a tool and die maker for Click’s Tools in Syracuse, NY and various other companies. Any excuse for a ride, whether checking the rise and fall of the river, peeping at the leaves, or just checking out nature he put on over 20,000 miles a year. He married Denise (St-Jean) Maheu in 1979, and had a daughter named Josée Maheu. Robert was a great dad. He is survived by, his step-daughter Josée Maheu, his brother Charles E. Rider of Liverpool, several nieces, nephews, grand-nieces and grand-nephews as well as the Huntington family and many friends. Do to Covid-19 there will be no services held at this time. He will be Cremated and buried with his late ex-wife Denise (Maheu) St-Jean in Quebec, Canada as he wished. The M. B. Clark, Inc. Funeral Home in Lake Placid, NY is in charge of arrangements. Friends are invited to share a story, upload a photograph or plant a tree in his memory at www.mbclarkfuneralhome.com .