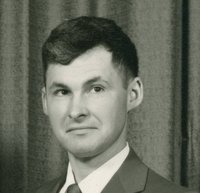 James F. Ashline, 84, of Rouses Point, NY, died on December 19, 2020 at Green Mountain Nursing Home in Colchester, VT. He was born on July 9, 1936, the son of Raymond and Tina (Fitch) Ashline. James married Herta Kalweit in Plattsburgh, NY, on May 9, 1970, and was a life-long farmer in Rouses Point. He is survived by a daughter and son-in-law, Amy and Glen Stegner, of Grand Isle, VT, and two sons and a daughter-in-law, David of Rouses Point, NY, and Daniel and Sujata Bhatia, of Newark, DE, and four grandchildren, Lucas and Olivia Stegner of Grand Isle, VT and Sumitra and Herta Ashline of Newark, DE. James was predeceased by his parents and his wife, Herta. Funeral arrangements are in the care of M. B. Clark Funeral Home of Champlain, NY. Calling hours will be private. Burial will occur in the spring at Maple Hill Cemetery in Rouses Point.