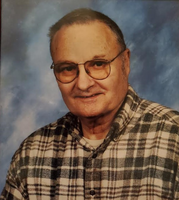 Eugene Roland Wood, 82, passed away at home surrounded by love, just before dawn on December 23, 2020. Born in Upper Jay, NY on March 5, 1938 to Roland Wood and Helen LaBombard, Eugene spent most of his early days on Heaven Hill Farm where he aided his father in farming. Gene worked at Last Chance Ranch and caddied at various golf clubs while attending Lake Placid High School -from which he graduated in 1956. Gene married Donna Mayotte in St. Alphonsus Church on November 23, 1957 and they had five children: Russell, David, Daniel, Scott, and Noelle. As a young husband and father, Gene worked for Heim Beverage Company, sold Fuller Brush Products door to door during the day, and drove taxi at night. The stone wall Gene built on Hawk Island is one of many demonstrations of determination, as it still stands strong today. Gene's passion for earnest hard work was rewarded when he acquired his own business in the late 60's from John Viscome. Gene's Shell Gas Station became the iconic full-service station located "directly across from the Olympic Arena". Gene's generosity and devotion was evident by the many customers he provided several services to. It was not uncommon for Gene to phone home during the day and ask one of his five children to go search for a certain size tire on their property for a customer. All of Gene's sons began their first responsible job at the station where we were taught the value of a strong work ethic. As young children in the early 70's, riding shotgun in a Jeep CJ-5 while their dad was plowing was often scary, but always thrilling. Gene's passion for life was fun and full of energy. With a great smile and outgoing personality Gene was a music lover and trumpet player, entertaining in high school band, church or outside parks for enjoyment. He encouraged music with his children and acquired a baby grand piano from the attic of Camp Minnowbrook on Lake Placid Lake. Engaging his manpower friends, he rescued the antique- which historically entertained the thousands on the lake during early to mid-1900's. It served as entertainment in the home for his daughter to play and now resides in the Mirror Lake Inn. Gene had a love of the outdoors. He purchased a twenty-six-acre property for his family and immediately began creating outdoor excursions; including a man-made pond for swimming and ice skating. His children, their cousins, and friends indulged in the space and freedom of the property. Gene's purchase of the Starcraft boat gave the family hours of fun; water skiing on Lake Placid and Middle Saranac, several children were able to water ski for their first and possibly only time in their life under his direction. Gene's passing is poignant during this time as he was the epitome of a "Secret Santa" throughout the year – anonymously helping anyone he knew was in need, and often "turning the other cheek". Gene's involvement with the Lake Placid Speed Skating Association as coach and referee earned him Chief Referee of the Northern New York Speed Skating Association for several years. Gene would pile his station wagon full with luggage, skates, jigs and rambunctious skaters, then travel the entire Eastern Seaboard. His greatest enjoyment with the Lake Placid Speed Skaters was to guide, coach, encourage, and build confidence; always ensuring the skaters experience travel and excitement. Gene's last years were spent riding his bike, reading, writing, music, and he walked many miles. To walk one mile in our Dad's shoes was by far the biggest roller coaster experience of a lifetime. "A hero is no braver than an ordinary man: but he is brave five minutes longer." "Gener" is survived by his brother Michael P. Wood, Donna Haig (Mayotte), former wife of 27 years, four surviving children: David (Roxanne), Daniel (Angela), Scott (Kylie), and daughter, Noelle (Todd). Gene is also survived by twelve grandchildren Christopher, Julia, Trevor, Ellysia, Jeremy, Justine, Zachary, Lily, Aiden, Brock, Kaylee, Wyatt; six great grand-children; six nieces, and three nephews. Eugene was pre-deceased by his sister, Nancy Foster, his parents, and his first-born son Russell. A Graveside Service is scheduled for Saturday, January 9th at 11:00 AM at North Elba Cemetery, Old Military Rd., Lake Placid, NY. Memorial contributions in Eugene's name can be made to High Peaks Hospice, Alzheimer's Association, or any mental health organization of your choice. Presence of family and close friends will require current COVID restrictions to be followed. The M. B. Clark, Inc., Funeral Home in Lake Placid, NY is in charge of arrangements. Relatives and friends wishing to share a memory, upload a photograph or leave condolences please visit www.mbclarkfuneralhome.com . . .