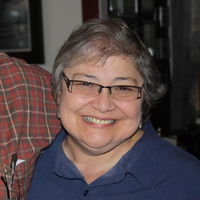 Paula Ann Reed McDonough, of Keene Valley, passed away at her home in Keene Valley, on Feb 5, 2021. She was 67. She was born July 25, 1953 in Plattsburgh, NY to her parents Royce Bradford and Argenta LeClair Reed. She spent her childhood in the North Country, while her father worked building many of New York's interstate highways. She graduated from Keene Central School in 1971. She married the love of her life and high school sweetheart, David McDonough, in 1979, and settled in Keene Valley, where they raised their three children. She was an employee of the Town of Keene for over 30 years. After her retirement, she stepped into her second job at McDonough's Valley Hardware alongside her husband David. She took the reins as "Boss Lady" and kept the store running after his death in 2013. She was a doting "Meme" to her three grandchildren, was a devoted parishioner of St Brendan's Church in Keene, and loved traveling with her family. Paula is survived by her daughter Tiffani and husband Robert Kearney, of Chicago; daughter Taetum Crooker and husband Justin of Ballston Lake; son Ewen and wife Jessica of New York City; grandchildren Matthew and Adam Crooker, and Charlotte McDonough; her brother Bruce and wife Carol, and nieces Sunny Beach and Summer Reed, of Keene, as well as many cousins and friends. She was predeceased by her beloved husband David and her parents. A private funeral, due to COVID restrictions, will be held Thursday February 11 at St Brendan's Church, with a public burial at Norton Cemetery to follow at 12:30pm. There will be no calling hours. A celebration of Paula's life where we can gather, will be held this summer. Memorial contributions may be made to St Brendan's Church in Keene, or the American Lung Association. The M. B. Clark, Inc., Funeral Home in Lake Placid, NY is in charge of arrangements. Relatives and friends can view the memorial video, share a memory or leave condolences at www.mbclarkfuneralhome.com .