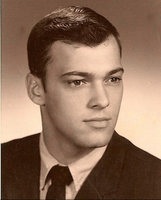 Ernest Hough III, age 75, passed away on May 25, 2022 at Adirondack Medical Center in Saranac Lake. Ernest was a Lake Placid High School Graduate, Class of 1964. He attended Oswego State, and Canton ATC, Class of ‘67. Ernest was a veteran of the United States Marine Corps. On June 29th, 1968 Ernest married the love of his life and High School Sweetheart, Susan Kaltenbach. Ernest was a three-sport athlete at Lake Placid High, excelling at football, hockey, and baseball. Ernest was renowned for his prowess on the ice, & his slap shot is still discussed as being the hardest ever faced by goalies in the North Country. Ernest was a youth hockey coach and the first ice hockey coach for North Country Community College, as well as the first girl's youth hockey team in Lake Placid. He is survived by his two sons Ernest Hough IV (Kelly) and Colonel Trevor Hough (Erin) of Greenville, South Carolina. He is also survived by: his grandchildren Mitchell, Zada, Pearl, Sophia, Grant, and Hope; his siblings Starr Hough, Jon Hough, and Heather Dreissigacker. He was predeceased by his beloved wife Susan, his parents Laura and Ernest Jr., and siblings Beth Hough and Tony Kilburn. A graveside memorial service will be held at a future date. A celebration of Ernest’s life was held on Saturday, May 28th at the American Legion Post 326 in Lake Placid. Memorial donations in Ernest’s name may be made to Mission 22 or the Special Operations Warrior Foundation.