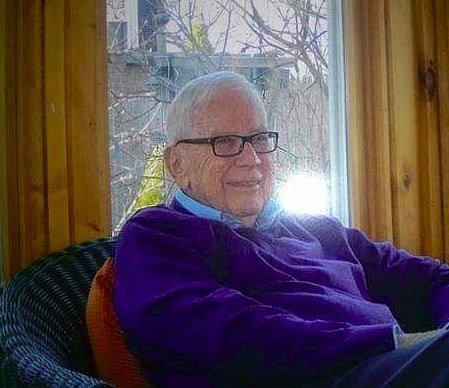 Please share a memory of Joseph to include in a keepsake book for family and friends.
View Tribute Book
Joseph H. Bailey, 95, passed away at Meadowbrook Nursing Home on July 23, 2021. Born in Worcester, MA on February 25, 1926 to Jack and Mary (Leary) Kelly. He was adopted in 1929 by Mr. and Mrs. Joseph Harrison Bailey II. He spent his youth in Greenfield, MA before eventually moving to Quebec. He moved to Rouses Point, NY in the early 40s to take a job at Ayerst, McKenna & Harrison. He would go on to work there until his retirement in 1987. After a few years of retirement, he decided he wanted to go back to work. He started at the County Court House where he worked until his 90th birthday. It was when he moved to Rouses Point that he met the love of his life, Wanda M. Traynor. They were married on September 1, 1951. They were married until Wanda's passing on April 21, 1990. He is survived by his 4 children, Kevin and his wife Susan of Holland, PA, Alicia and her husband Thomas Sherwin of Newfields, NH, Mary Kim and Paul Anderson of Concord, NH and Sean and his wife Leanna of Stephentown, NY. He is also survived by Carolyn Bailey of Jacksonville, FL. His grandchildren Michael and his wife Bridget Bailey, Christopher Bailey, Bailey Sherwin, Patrick Sherwin, Sarah Anderson, Luke Anderson, Brittany and her husband Andrew Dismukes, Jordan and his wife Ansley Bailey and Caitlin Wyand. His great-grandchildren Harper, Sloan and Scarlett Bailey. He was a kind soul who treated everyone with respect. A true gentleman in every sense of the word. He lived life with joy in his heart, and his catholic faith was his strength in good times and bad. His hobbies included playing the piano, gardening, sketching and painting. His favorite pastime was socializing with his family and friends. He firmly believed in community service. He enjoyed a lively debate regarding politics and volunteered his time with the Democratic Party. Over the years, he served as trustee for Rouses Point and councilman for the Town of Champlain. He also served as trustee for the Dodge Memorial Library, member of the Knight of Columbus 2366, Eucharistic Minister at St. Patrick's Church and on the board for Sunmount Residential Services. He was part of a beautification committee that planted tress on Lake Street, and always enjoyed planting flowers at the park and library. He enjoyed visiting friends who were in the hospital or in the nursing home, and never arrived empty handed. He would write notes to old friends that had moved from Rouses Point and always included newspaper clippings he thought they would enjoy. The family would like to thank Dr. Esterson and the staff at Hudson Headwaters for all the care he received there. The family will be forever grateful for the care he received at 260 Lake Street. Finally, the family wants to thank Janie Letourneau for all the care she gave their father. She went above and beyond the call of duty. Calling hours will be on Friday, September 3, 2021 from 2:00 PM - 5:00 PM at M. B. Clark Funeral Home in Rouses Point. A funeral service will be held on Saturday, September 4, 2021 at 11:00 AM at St. Patrick’s Church in Rouses Point. A gathering will take place at the American Legion in Rouses Point following the burial at St. Patrick’s Cemetery. In lieu of flowers, donations may be sent to the Rouses Point Rescue Squad.
To send flowers to the family or plant a tree in memory of Joseph Bailey, please visit Tribute Store
Friday
3
September

Share Your Memory of
Joseph
Upload Your Memory View All Memories
Be the first to upload a memory!
Share A Memory
Send Flowers
Plant a Tree