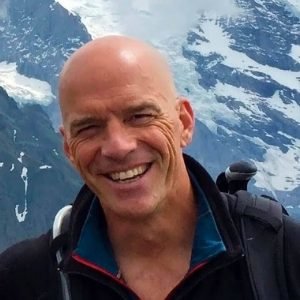 Please share a memory of Jeffrey to include in a keepsake book for family and friends.
View Tribute Book
A CELEBRATION OF JEFF VOLMRICH Jeffrey Ross Volmrich passed from this earth in the early morning of Wednesday, July 28, 2021. Jeff was an athlete, husband, brother, son, father, mentor, and friend. Born in Pittsburgh, Pennsylvania on January 22, 1964, Jeff spent the winters of his early youth learning to ski at Hidden Valley Ski Resort, but spent his summers at his family's camp on Buck Island in Lake Placid which became a spiritual center for him. He spent many summers over the years as well as the last several weeks of his life living there. Jeff's father, Arthur, and mother, Georgia were influential mentors and guides on his life journey. His sister Katherine was a lifelong friend, spiritual anchor, and occasional savior/bail bondsman. His brother, Douglas, and his step siblings Susan, Forest and Paula were often partners in crime. Jeff married Fiona White on August 7, 1999, and they had a wonderful partnership for over twenty years. They made their home in Park City, Utah building their business and raising their family. Jeff was immensely proud of his two daughters, Taylor Grace Volmrich and Savannah Mary Volmrich, both of whom are accomplished athletes, pageant competitors, and wonderful human beings. As a father, Jeff was a patient and thoughtful teacher across the many, many facets of life; that if things were worth doing, they were worth doing well, or at least to the best of your personal ability. Jeff loved his family deeply and one of his few regrets might have been leaving his girls too soon. In 1974, Jeff's family relocated to Lake Placid full time, and he was introduced to the sport of Nordic ski jumping. Jeff graduated from Northwood School in Lake Placid and went on to attend St. Lawrence University where many of his lifelong friendships were born. A gifted athlete from a young age, Jeff became the Junior National Champion at age 14, and competed on the World Cup for the U.S. Ski Team where he was a member from 1981 until 1989. Jeff was also a nationally ranked water skier, an avid telemark skier, and a skilled fly fisherman. There were few sports that Jeff did not excel at once he put his mind to them. Jeff was more than just a great athlete; he was an enthusiast of life. He had an infectious joie de vie that made him a great story teller, traveling companion, competitor, mentor and an introspective conversationalist. He loved to teach others to water ski on Lake Placid, as well as to partake in the many other activities in that environ; a passion that earned him the apt moniker of "The Sorcerer of Fun". He spent many childhood summers at Camp Woodsmoke, became a 46er at age 13 and his camp experiences were an indelible influence on his life. Jeff was also an incredible friend. He cultivated his friendships carefully and valued them as important threads in the fabric of his life. In doing so, he embedded himself in the lives of many. Jeff was a big man, with an even bigger presence; some would even say…Huge. His spirit will live among us forever. Rock on Jeffrey! There will be a celebration of Jeff's life at Moose Lodge at the Whiteface Inn in Lake Placid on Friday, August 6th from 2:30 to 5:30pm. Dress will be informal and guests are invited to come with prepared remarks. In lieu of flowers, the family asks that donations may be sent to: Adirondack Foundation: ACT for Placid Lake Protection Fund Memo line: Jeffrey Volmrich Education Program PO Box 288 Lake Placid, NY 12946 .
To send flowers to the family or plant a tree in memory of Jeffrey Volmrich, please visit Tribute Store
Friday
6
August

Share Your Memory of
Jeffrey
Upload Your Memory View All Memories
Be the first to upload a memory!
Share A Memory
Send Flowers
Plant a Tree