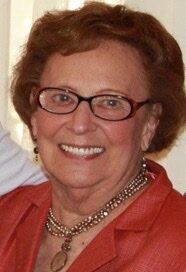 Please share a memory of Lorena to include in a keepsake book for family and friends.
View Tribute Book
Lorena B. Lees, 96, of Bryn Mawr, PA was called on October 13, 2021 from her earthly home to live eternally with her Lord and Savior and those who left before her. She passed peacefully at her home with loving family by her side under the care of Main Line HealthCare Hospice. Lorena was born in Champlain NY on June 19, 1925, the eldest child of the late Clarence J. and Lorraine M. (Monette) Ashline. She had three brothers, Charles, Roy and Clarence and three sisters, Grace, Lena and Lucy. Shortly after graduating from Rouses Point High School in 1943, Lorena found employment in the production department of Ayerst Laboratories in Rouses Point NY. On January 25, 1947, she married Francis Dumas and was faithful to him in marriage until his untimely passing in 1967. From that union she had three lovely children: Linda, Barbara and Francis. She then took a few years sabbatical leave from work until her children were of school age and later resumed employment again in 1958. In 1968 Lorena met Jeffrey Lees who was employed in the quality control department of the same company. They were subsequently married on September 3, 1970 and recently celebrated their 51st wedding anniversary. On August 14, 1987, Lorena retired from Wyeth Laboratories after 29 continuous years of loyal and dedicated service. In November of 1988, Lorena relocated with her husband to Bryn Mawr PA where he continued to work for Wyeth at their corporate headquarters in Radnor PA. Lorena, however, was not one to remain idle. On May 30, 1991, she accepted a part-time position with the Bryn Mawr Hospital Thrift Shop and finally retired from her second career 23 years later on July 22, 2014. Lorena was an active member and communicant of St. John Neumann Roman Catholic Church in Bryn Mawr, PA and previously of St. Mary’s Roman Catholic Church in Champlain NY. She was also a charter member of the Catholic Daughters of America Court Lily of the Mohawk No. 1451 in Champlain NY where she maintained her membership for 73 years. She also touched the lives of others in many ways with her loving presence, her genuine faith, her positive attitude, her strong determination, her protective concern and her care-filled spirit. Lorena loved to cook and was known for her delicious meals, cookies, deserts and feasts for all who visited her home. She was a remarkable woman of intelligence and beauty, who valued the simple things in life, like a meal shared, a special TV show, a job well done, a night out for dinner, a Broadway musical, a week at the shore, a party enjoyed or a thoughtful act of kindness. She made a positive impact on all who knew her. Spending time with her three children and family also gave her great joy. She was humble of heart and was a true lady. All forms of nature won Lorena’s heart. People, good times, animals (fox terriers especially), the birds and flowers too have all been brought together for her to see beauty and love that’s true. Her faith in the Lord Jesus and devotion to the Blessed Virgin Mary were unfailing to the end. Lorena was predeceased by her first husband Francis Dumas, her parents Lorraine and Clarence Ashline, her brothers Charles and Roy Ashline and sisters Grace Hamel and Lena Matott. Surviving and carrying on her spirit are her second husband, Jeffrey Lees of Bryn Mawr PA; her sister and brother-in-law Lucy & Robert Goddeau of Rouses Point NY, her brother and sister-in-law Clarence & Sarah Ashline of Rouses Point NY, her sister-in-law Loretta Ashline of Champlain NY, her daughter and son-in-law Linda & Philip Koenig of Westerville OH, her daughter Barbara Brydges of Naples FL and her son and daughter-in-law Francis & Carol Dumas of Champlain NY. Also surviving are nine grandchildren: Christopher (Mindy) Koenig of Westerville OH and Sherri Koenig (Brad) Coomes of Powell OH, Jennifer Brydges Carl of Green Island NY, Kelly Brydges (Robert) Turner of West Bloomfield MI, Marcy Brydges (Matthew) McNamara of Ballston Spa, NY, Betty Brydges (James) Szatkowski of Fayetteville, NY, Michael Brydges of Naples FL, Jenelle Dumas of St Albans VT and Tyson (Kerri) Dumas of Mooers NY. Additionally surviving are fifteen great-grandchildren: John Henry and Anthony Carl of Green Island NY, Natalee and Jaxson Koenig of Westerville OH, Patrick, Thomas and Erin Turner of West Bloomfield MI, Eleanor, Thomas and Annie McNamara of Balston Spa NY, Samantha, Jack and Hunter Szatkowski of Fayetteville NY and Tess and Gage Dumas of Mooers NY as well as many cousins, nieces and nephews, and a host of other relatives and friends. Calling hours will be held on Sunday, October 17, 2021 from 4:00 to 7:00 PM at M. B. Clark Funeral Home, 196 Elm Street, Champlain, NY. The Catholic Daughters of America, Court Lily of the Mohawk #1451 will conduct a Memorial Service at 6:15 pm. A Mass of Christian Burial will be celebrated at 11:00 am on Monday, October 18, 2021 at St. Mary’s Catholic Church, 86 Church Street, Champlain NY 12919. Interment will immediately follow at St Mary’s Cemetery, located at the corner of Church Street and South Street in Champlain NY. A reception and repast will be served at the American Legion, 29 Pratt Street, Rouses Point NY immediately following the funeral service. In lieu of flowers, friends may wish to donate to the American Cancer Society or a charity of your choosing. Lorena’s family is extremely grateful for her Main Line Health Hospice caretakers: Deborah Fioravanti, Kelly Yetter, Alisa Reilly, Joan Hinkel, Helene Mills-Tarpinian, Marianne Antes, Daphne DaSilva and Nicola Knight. Arrangements are entrusted to the M. B. Clark Funeral Home in Champlain, NY and the Stretch Funeral Home in Havertown, PA. Online condolences may be offered at www.mbclarkfuneralhome.com.
To send flowers to the family or plant a tree in memory of Lorena Lees, please visit Tribute Store
Sunday
17
October

Share Your Memory of
Lorena
Upload Your Memory View All Memories
Be the first to upload a memory!
Share A Memory
Send Flowers
Plant a Tree