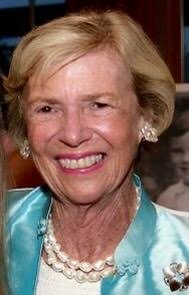 Please share a memory of Virginia to include in a keepsake book for family and friends.
View Tribute Book
Virginia Snyder Citron, known as Ginny, passed away Monday, April April 25th, 2022, at the age of 89. She died peacefully at home in Delray, Florida surrounded by her family. She leaves behind four children, Virginia S. McGraw, James H. McGraw IV (Jane Love), W. Scott McGraw (Catherine Delahunt), and David D. McGraw (Elizabeth Frank). She was the proud grandmother of eight grandchildren, and two great grandchildren. Born in Wheeling, West Virginia in 1933, Ginny was the daughter of William Cordes Snyder, Jr. President and CEO of Blaw-Knox Steel Corporation and Virginia Harper Snyder, and older sister to William Cordes Snyder III. She was raised in the Pittsburgh suburb of Sewickley, where Ginny graduated from Sewickley Academy. She later went on to graduate from the Masters School, known to many as Dobbs, and continued her education at Briarcliff College. Ginny married James H. McGraw III in 1952, and after living briefly in Texas and Massachusetts, settled in Short Hills NJ, where they raised their four children. While living in Short Hills, Ginny was active in the Short Hills Garden Club and the Junior League. She and her husband remained married until 1976. Subsequently, Ginny moved to Chatham, Mass. where she spent many summers enjoying her friends and family on the Cape. During the winter months, she resided in Delray, Florida, where her parents Cord and Virginia previously established winter residency. In 1993 Ginny married Thomas Citron from Short Hills, and they remained married until the end of Mr. Citron's life in 2013. Ginny was a wonderful mother and grandmother, and nothing mattered more to her than the closeness of her family. She was a great presence in all of their lives and treasured the time they spent together. Ginny was beautiful and elegant in every way and was extremely active on the tennis courts and golf course throughout her life. In addition to the love she had for her family, she greatly valued her friendships, whether from her school days, or the lifelong friendships made in Short Hills, Lake Placid, and Chatham, Mass. She loved entertaining, was extremely outgoing and had a zest for life. Ginny also loved music, and rarely lived her life without music playing in the background. Whether it was Jimmy Durante, Burt Bacharach, Broadway show tunes or pop, music was a lifelong passion which she passed down to her children. Ginny lived a wonderful and blessed life and she will be sorely missed by her family members and friends. Ginny will be laid to rest at a private family service in Lake Placid, NY later in May. The M. B. Clark, Inc., Funeral Home in Lake Placid, NY is in charge of arrangements.
To plant a beautiful memorial tree in memory of Virginia Citron, please visit our Tree Store

Look inside to read what others have shared
Family and friends are coming together online to create a special keepsake. Every memory left on the online obituary will be automatically included in this book.
View Tribute Book
Services for Virginia Citron
There are no events scheduled. You can still show your support by planting a tree in memory of Virginia Citron.
Plant a tree in memory of Virginia

Share Your Memory of
Virginia
Upload Your Memory View All Memories
Be the first to upload a memory!
Share A Memory
Plant a Tree