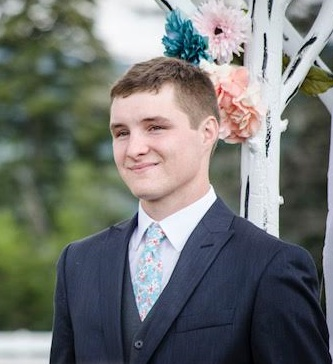 Please share a memory of Zackrey to include in a keepsake book for family and friends.
View Tribute Book
Beloved father, husband, friend, and brother Zackrey John Peck passed away on Friday, July 22nd, at the too young age of 28. Zack, the son of Jeffrey Peck and Rhonette MacDonald, was born on January seventh, nineteen ninety-four in Saranac Lake. Zack attended Saranac Lake Central Schools until tenth grade where he then moved to Malone, NY and was a graduate of Franklin Academy. A tradesman at heart, Zackrey enrolled in the local IBEW 910 trade school at nineteen and soon became a journeyman wireman. A few months into such, Zack met the love of his life in McKenna Stanton, of Lake Placid, and soon after they welcomed their first child into the world in Nash Jeffrey Peck. Their second son Lucas William Peck joined them shortly after that, before the couple tied the knot on August Nineteenth, two thousand seventeen in Lake Placid, NY. Maeve Mary Peck was born in 2020, completing the Peck posse. The couple purchased their first house in Ellenburg Depot, NY and in turn Zack spent countless hours developing the property; creating trails for the kids to ride dirt bikes on, building treehouses, and getting lost with his children on their eighteen acres of land. Zack, clearly, was a family man; always quick to lend a hand to any of his brothers or in laws. He enjoyed hunting, four wheeling, archery, dirt biking, fishing and spending time in the woods with his children and his dad. Like good ol' boys do. In addition to his wife and children, Zack is survived by his father and mother, Jeffrey and Rhonette, his brothers, Ethan and Logan Peck, his sister, Ronnie Marie Dumont, as well as his grandparents, Annette and Jim Cartier and Roberta and Stephen Silliker. He was predeceased by his grand fathers and John Peck and Ronald Raymond. For those wishing to pay their respects to Zackary and the family a memorial of life will be held at the M. B. Clark, Inc., Funeral Home in Lake Placid, NY on Friday, July 29, from 3pm-5pm, The funeral Service will follow at 5:00 pm with Rev. John Yonkovig officiating. A reception to follow at the High Peaks Resort. In lieu of flowers, a Gofundme page has been established for the family as they attempt to navigate these difficult times. Any gifts or donations can be directed to :: https://www.gofundme.com/manage/mckenna-stanton-peck-and-family please visit www.mbclarkfuneralhome.com to share a memory or leave condolences for the Peck family.
To send flowers to the family or plant a tree in memory of Zackrey Peck, please visit Tribute Store
Friday
29
July

Share Your Memory of
Zackrey
Upload Your Memory View All Memories
Be the first to upload a memory!
Share A Memory
Send Flowers
Plant a Tree