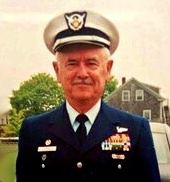 Please share a memory of William to include in a keepsake book for family and friends.
View Tribute Book
William (Bill) G. Russell, Jr., age 92, died June 19, 2022, in his beloved town of Chatham. He had been a resident since 1993 when he and his wife, Josephine (Jo) of 59 years moved from Mt. Kisco, New York. Bill was born in White Plains, New York, on September 20, 1929. He is the son of William G. Russell, Sr., and Laura Josten Russell of Scarsdale, New York. He is survived by his four daughters, Kathleen Russell DePanfilis (Ralph), Patricia Russell Jack (David), Gail Porrazzo (Thomas), Elaine Russell and his dear sister, Janet Daly. He leaves behind seven grandchildren, Russell DePanfilis, Thomas Porrazzo (Lauren), Kevin Sparacino, Mark DePanfilis, Ralph Porrazzo, Daisy Curtis (Chase) and Yolanda Porrazzo, and two great grandchildren, Anevay and Ava Porrazzo. He graduated from Eastchester High School in Eastchester, New York, and was a carpenter by trade. He entered the Air Force National Guard in 1951 as a flight mechanic and then became a flight engineer in 1954. He flew F47s, F86s, C119s and C97s to Guam, the Philippines, Vietnam, England, Germany, Greece, Japan, Spain, Portugal, Canada and Iceland for a total of over 5,000 flight hours. He had 37 years as an active Air National Guardsmen retiring as a Chief Master Sergeant. In his retirement, Bill served with the Coast Guard Auxiliary Flotilla out of Chatham, worked for the Chatham Chamber of Commerce and was the doorman at the Chatham Bars Inn. Everyone will remember Bill as a loving father, grandfather, uncle and friend to all. He would always ask strangers “Where are you from?” and he would probably have visited that location or would have known someone in that town. Due to the loving care he received at the end of his life, the family is asking that donations be sent to Broad Reach Hospice and Palliative Care, 390 Orleans Road, North Chatham, MA 02650, in his name. Bill will be laid to rest at a private service at the National Cemetery in Bourne, Massachusetts.
To plant a beautiful memorial tree in memory of William Russell, Jr., please visit our Tree Store

Look inside to read what others have shared
Family and friends are coming together online to create a special keepsake. Every memory left on the online obituary will be automatically included in this book.
View Tribute Book
Services for William Russell, Jr.
There are no events scheduled. You can still show your support by planting a tree in memory of William Russell, Jr..
Plant a tree in memory of William

Share Your Memory of
William
Upload Your Memory View All Memories
Be the first to upload a memory!
Share A Memory
Plant a Tree