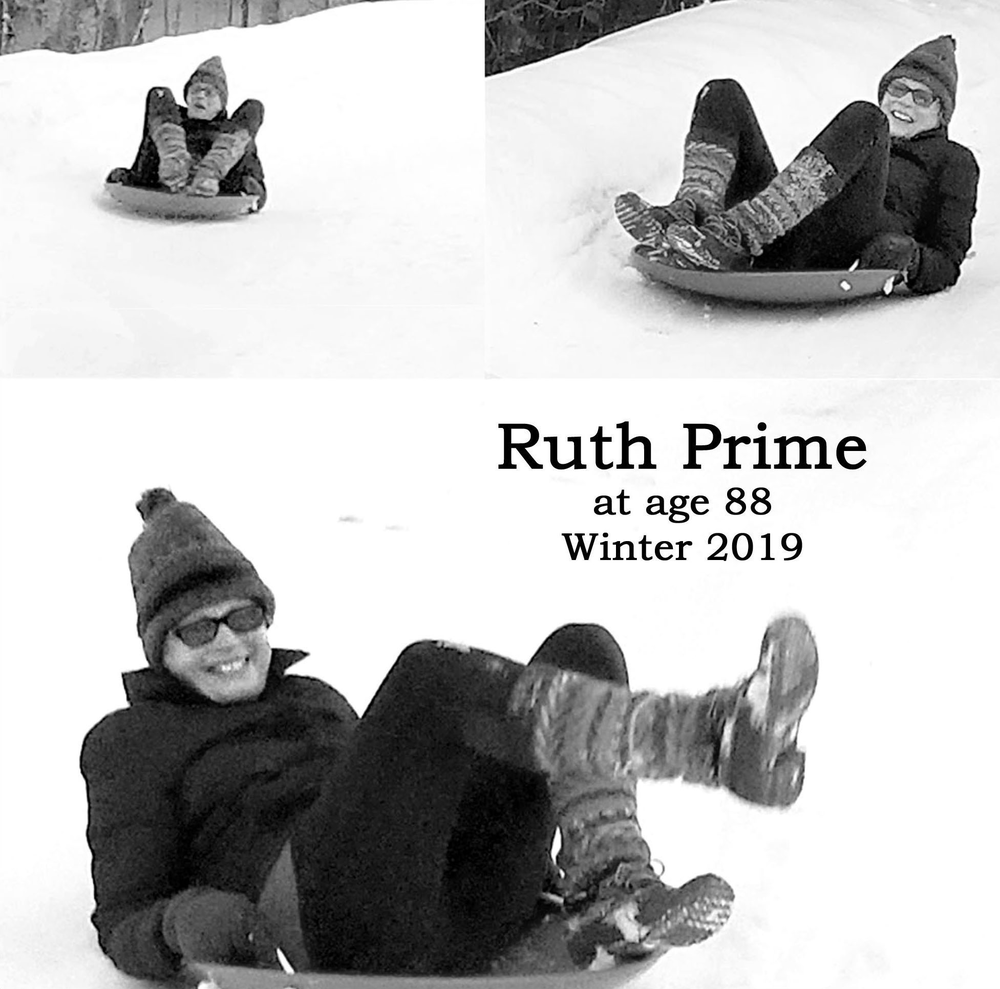 Please share a memory of Ruth to include in a keepsake book for family and friends.
View Tribute Book
Ruth Mace Prime passed away peacefully at her beloved home early in the morning of January 13, 2021. Her son, Jon, was by her side. She died from complications of congestive heart failure at age 90. Born in Brooklyn, NY, on June 28, 1930, to Romaine and Earl Mace, she spent her childhood in Morristown, NJ. Ruth graduated from The Kent Place School and later pursued music at Smith College. She then went on to teach kindergarten at The Peck School in Morristown. Her marriage to George Bramhall ended in divorce in 1955 and she moved to Keeseville, NY with her two small children, Peter and Darcy. Ruth married Ted Prime of Lake Placid, NY in 1957, giving birth to Jonathan Prime a year later. She loved spending summers at Ted's family camp on Connery Pond before the family moved to Mt. Whitney Road in 1968. Ruth was active in Girl Scouts and the Lake Placid Sinfonietta. She and Ted were divorced in 1974. It was while honeymooning with Ted in Aspen, CO that Ruth fell in love with skiing; a passion that led to her becoming a ski instructor at Dream Hill and Mt. Whitney. After buying Thayer's Ski Shop in 1968, she opened Ruthie's Run, named after her favorite trail in Aspen. The business became a popular hub for ski and sports enthusiasts from all over the North Country. Ruth sold the store in 1984. That fall, she purchased the Adirondack Store, founded in 1955, with her son, Jon, who operated the business. She spent the following year in London studying at Christie's School for Decorative Arts. Afterwards, she divided her time between her homes in Lake Placid and Seattle. The Adirondack Store was sold in 2015. Interests included entertaining at her cherished home on the Whitney Road where she warmly welcomed people of all ages. Ruth was a devoted grandmother, a world traveler, and an avid gardener. She took great delight in both feeding and individually naming the wildlife outside of her windows and never tired of the ever-changing views of Whiteface Mountain in the distance. Astute, adventurous and fun-loving, Ruth lived every day to the absolute fullest, quite literally until the morning she left us. She was a force of nature whose bright smile will be sorely missed. Ruth is survived by her three children, Peter Prime (Kathy) of Greenwich, CT, Darcy Prime of Menlo Park, CA and Jon Prime of Lake Placid; grandchildren, Heather Prime of San Francisco, Kevin Prime of Lake Placid and Emma Neville of San Francisco; a sister, Jean Burnell of Seattle; and twelve nieces and nephews. A celebration of Ruth Prime's life will be held later this summer. Arrangements are in the care of M.B. Clark Funeral Home in Lake Placid. The family wishes to extend their gratitude to the Adirondack Medical Center in Saranac Lake for their outstanding care. In lieu of flowers, donations can be made in Ruth's name to the Adirondack Health Foundation, the Lake Placid Volunteer Ambulance or Planned Parenthood of Saranac Lake. Relatives and friends are invited to share a story, upload a photo, or leave condolences at www.mbclarkfuneralhome.com .
To plant a beautiful memorial tree in memory of Ruth Prime, please visit our Tree Store

Look inside to read what others have shared
Family and friends are coming together online to create a special keepsake. Every memory left on the online obituary will be automatically included in this book.
View Tribute Book
Services for Ruth Prime
There are no events scheduled. You can still show your support by planting a tree in memory of Ruth Prime.
Plant a tree in memory of Ruth

Share Your Memory of
Ruth
Upload Your Memory View All Memories
Be the first to upload a memory!
Share A Memory
Plant a Tree